It all started with a doodle…

In 1959, Seattle hotel executive Edward E. Carlson, who was a chief organizer of the 1962 World’s Fair, traveled to Stuttgart Germany where he was inspired by a broadcast tower featuring a restaurant. He doodled an idea of a dominant central structure for the fair on a napkin in a hotel café convinced that such a tower could make a permanent center-piece for the fair and an enduring symbol for Seattle. He called it a “Space Needle.” 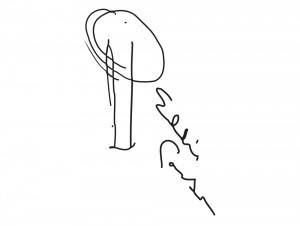 With innovation comes challenges…
Carlson and his supporters soon found moving the symbol from doodle to the drawing board, and then to the construction phase, was far from easy. The first obstacle was the structure’s final design. Carlson’s initial sketch underwent many transformations, including designs that resembled a landed UFO, a tethered balloon and even a cocktail shaker with a tram ferrying visitors to the top.

Architect John “Jack” Graham, Jr. fresh from his success in designing the world’s first auto-centric shopping mall (Seattle’s Northgate) and experimenting with a revolving bar in Hawaii, focused on a flying saucer-shaped top house. Graham’s team worked on sketches and ideas before a final design was reached just a year and a half before the World’s Fair. Architect Victor Steinbrueck came up with the wasp-waisted tower shape based on an abstract sculpture of a dancer called “The Feminine One.”

Home sweet home … planting our three legs.
Location and financing were also major challenges. The tower had to be privately financed and situated on land that could be acquired for private use on the fairgrounds. Early investigations indicated such a plot of land did not exist. However, just before the search was abandoned, a suitable 120-foot-by-120-lot on the site of an old fire station was found and sold to investors for $75,000 in 1961, just 13 months before the opening of the World’s Fair.

Construction, managed by the Howard S. Wright Construction Company, progressed quickly. An underground foundation was poured into a hole 30’ deep and 120’ across. It took 467 cement trucks an entire day to fill the hole, and the largest continuous concrete pour ever attempted in the West. Once the pour was completed, the foundation weighed as much as the Space Needle itself, establishing the center of gravity just five feet above ground.

Let’s get ‘Spacey’
The basic Space Needle tower was completed in December 1961, eight months after it began. In keeping with the 21st Century theme of the World’s Fair, the final coats of paint were dubbed ‘Astronaut White’ for the legs, ‘Orbital Olive’ for the core of the structure, ‘Re-entry Red’ for the Halo and ‘Galaxy Gold’ for the sunburst and pagoda roof. The Space Needle’s chief engineer, John Minasian, had also designed rocket gantries for NASA.

After the fair, a radio broadcast booth was built on the Space Needle for a local radio station.

The Wheedle
Local Seattle author Stephen Cosgrove introduced the beloved character, the Wheedle. The infamously shy, orange character resembled Bigfoot with a bright red nose and lived atop the tower. He was featured in a popular children’s story and later became the mascot for Seattle’s NBA basketball team, the SuperSonics.

The Space Needle falls…April Fools!
One evening in 1989, the KING-TV Almost Live comedy show ran a spoof news bulletin announcing that the Space Needle had fallen over. The live broadcast included a mocked-up graphic of the tower in ruins on the ground. The April Fools prank received international attention and overwhelmed Seattle’s 9-1-1 emergency system with people who believed it was real.

For its 35th anniversary in 1997, the tower introduces a new, short-lived mascot, Sneedle.

Legacy Lights
The Space Needle unveiled its Legacy Lights for the first time. The powerful beam of light is powered by lamps that total 85 million candela shinning upwards from the top of the tower to honor national holidays and special occasions. The Legacy Lights remained lit for eleven days straight in response to the September 11th attacks in 2001.

37 Looks Good on you. Happy Birthday!
On April 21, 1999, the Space Needle’s 37th birthday, the City’s Landmarks Preservation Board named it an official City of Seattle Landmark. In its Report on Designation, the Landmarks Preservation Board wrote, “The Space Needle marks a point in history of the City of Seattle and represents American aspirations towards technological prowess. [It] embodies in its form and construction the era’s belief in commerce, technology and progress.”

The tower completed a $20 million revitalization in 2000. The project included construction of the Pavilion Level, SpaceBase retail store, SkyCity restaurant, Observation Deck improvements, exterior lighting additions, exterior painting and more. In comparison, the Space Needle was built in for about $4.5 million dollars in 1962.

Space Race
For the Space Needle’s 50th anniversary, it sponsored “Space Race 2012,” a contest that selected one lucky individual to win an actual flight into orbit. The contest was announced by Buzz Aldrin, the Apollo 11 astronaut who was the second man to walk the moon.

Century Project
In September 2017, the Space Needle commenced construction on the largest renovation project in its history, “The Century Project.” The renovation aimed to reveal the tower’s internal structure and harken back to the original conceptual sketches, all while expanding and improving its views. The Space Needle remained open to the public during its 360-degree “Spacelift,” revealing its new look in late summer of 2018. Guests are now surrounded by two breathtaking, multi-level, floor-to-ceiling glass viewing experiences including an outdoor observation level with open-air glass walls and Skyriser glass benches. The upper observation level is now connected by the Oculus Stairs to The Loupe, the world’s first, and only, rotating glass floor below.